Life in the Big City

San Francisco and my left toe

We are in full harvest mode! 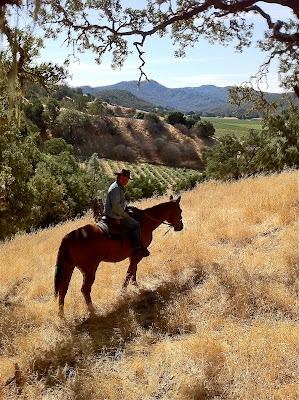 Posted by Cowboy at 8:09 AM No comments:

It's that time of year again

Jim is training Genuwine by picking up his front and back feet and then moving him with his body. Genuwine responds quite readily even though Jim hasn't worked with him on a consistent basis. Genuwine  had lots of handling during his first week of life both at the ranch and at UC Davis Vet Hospital and so he is very comfortable with human interaction and isn't fearful or resistant.
Posted by Cowboy at 3:16 PM No comments:

Visiting Genuwine on the hottest day of the year. He is quite happy with his extended family however he is always happy to see us. Soon he will be weaned and shortly after that we will bring him home to meet his cousin Devine Thief!
Posted by Cowboy at 10:18 AM No comments:

My mother likes to play soccer

GenUwine is now a healthy and big colt! 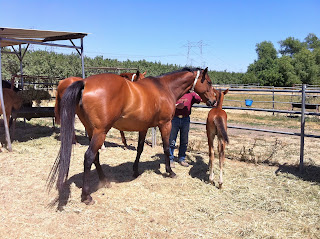 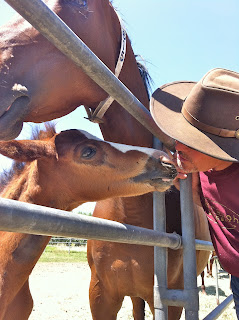 Posted by Cowboy at 8:46 PM No comments:

GenUwine at One Month Old!

Genuwine was born on Thursday April 19, 2012. His mother Kool Valley was a first time mother at twelve and we were quite concerned about her giving birth so we watched her very carefully and put her in a paddock each night and checked her every few hours. She gave birth in the early hours of April 19 and we were there to help her with the birth. She gave birth to GenUwine a beautiful colt who has the markings of his two grandmothers!  Our excitement and joy was soon tempered by health problems that both mare and foal were experiencing. Kool Valley was in a lot of pain and we had our local vet Dr. Gold come up to see her and GenUwine. Dr. Gold gave her pain meds and she seemed to be improving that Saturday evening, but on Sunday morning she took a turn for the worse and Jim loaded her on our van along with Genuwine and headed to UC Davis. The hospital had been alerted of our mare's condition and were ready for his arrival, but when Jim opened the back of trailer, she was dead and Genuwine was crouched in the corner.
The vets tried to get Genuwine out of the trailer but he wouldn't leave his mother. So Jim got inside the trailer and carefully walked him through his mother's legs and down the ramp. He was escorted into the vet hospital and examined thoroughly. He was admitted to the hospital and put on an IV.
Posted by Cowboy at 10:47 AM No comments:

Sundown at RustRidge after a great Kentucky Derby Day!

Posted by Cowboy at 1:00 PM No comments:

Wine Thief is preparing for his run for the roses in 2015!
Posted by Cowboy at 9:06 PM No comments:

And the work goes on


But it is not all about vineyards, there are horses here after all.

More about what's going on in Napa Valley's eastern hills